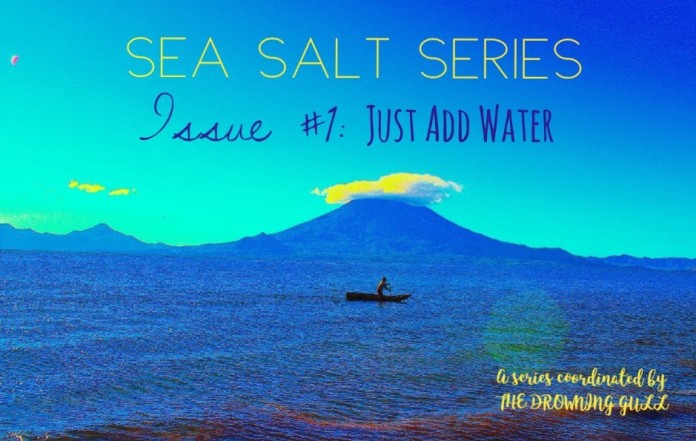 One Set of Prints for Two| Rick Kempa

May 5, 2017May 5, 2017 ~ Tiegan ~ Leave a comment
Kevin Zepper teaches at Minnesota State University Moorhead. He is the author of four books of poetry. Part of his creative time is devoted to performing collaborative poetry and music with his musical partner and colleague Terrie Manno. They call themselves Lines&Notes, performing at art venues and colleges. Zepper’s recent photography credits include: Inscape, Minnesota Portage, Barking Sycamores and other local publications. He loves New Mexico and collecting rocks and was once a contestant on Who wants to be a Millionaire? (nope, he didn’t win)
May 5, 2017May 5, 2017 ~ Tiegan ~ Leave a comment

smell the sea, and feel the sky

let your soul & spirit fly, into the mystic…”

I’ve never seen the ocean.  I’ve never seen crabs roaming about dunes with pinchers that seem like the monsters hiding in childhood closets; I’ve never seen dolphins off in the distance and imagined them as mermaids singing a siren song, irresistibly reeling me in. I’ve never tasted the briny salt in the air.

But I live near Lake Michigan. Even though it’s only a small fraction of the size of an ocean, it’s always seemed endless to me. As a child, I’d go out there, feel the burn of glassy sand between my toes, look at the sun glittering and dancing upon the skyscrapers and water. In the summer, I’d hear the rumble of laughter and music coming from the groups of people littering the beach. In the winter, I’d collect beached seashells and algae and stuff them carefully into the pockets of my puffiest purple coat. I would wonder what it would feel like to run out into the cold water, disobeying the “Do Not Swim” signs, and embrace the rush of torn plastic and ice.

The Drowning Gull’s first Sea Salt issue explores these feelings. Everyone who has touched water has been irreversibly touched back by it. They get swayed by the current; pulled in my its song. We all are lulled by the same waves. We consist of water, like Mary Ellen Talley’s Body of Water describes; and Lisa Marie Brodsky’s poem, Sleep is an Isthmus, hauntingly alludes to the fact that we are always drawn back to it.

I’d like to thank Tiegan for her endless effort to The Drowning Gull. Without her, none of this would be possible. Ben, Shonavee, and Rebecca (the latter two people, unfortunately, have discontinued their work for us) also deserve our gratitude for the effort they have put into this first Sea Salt issue. Thank you to our contributors – without you, there would be no issue!– and also to anyone else who submitted work (your effort and trust is valued!). Everyone who reads this issue, and everyone who continues to support all of us here at The Drowning Gull on our literary adventure, receives our hugs. Enjoy!

Blessings to all of you out there,

One Set of Prints for Two

In the winter of your first year we camped by the ocean. You would sleep beside me in the tent. Towards morning, but still night, you’d roll over, let out a cry. I’d take you outside to give you some fresh air. You liked that, fell quiet, turned your head towards Venus above the bluffs. You’d be perfect­ly alert. So I’d wrap you in your blanket, hoist you on my back, and we would walk.

It was chilly; you huddled close. I walked as briskly as I could, navigating the black clutter of seaweed and wood. My feet sank in the soft sand, the muscles in my calves and arches ached. I headed over to the water side, where the sand was packed, stripped bare, the going easier.

There, the beach abruptly fell off towards the water. The water, a body more or less in place, loomed up across from us, its surface head‑high or higher. We watched each wave in turn advance, drawing the wash from the last wave into itself, steepening into a black wall, until the crest began to froth, the spume to race along it like a white thread unravelling, and the water‑wall would collapse. The tremendous thump of each part against the sand, the shock felt underfoot, the explosion into foam, the giant tongues hissing up the bank towards where we were, wiping out my tracks.

You began to utter marvellous cries. Your feet braced on the pack’s frame, your knees against my spine, you lurched from side to side, or way over forward or back, your little arm and forefinger extended, shrilling your delight. At what? I peered after you. The stars, twice as bright in that atmosphere. An air‑bubble in the sand, into which perhaps you saw a ghost crab disappear. A trio of pelicans above a breaking wave. (Their cries from that other side seemed to mimic you.)

After a while you grew quiet, attentive to the rhythm of our walk. One motion described us. Your muscles slackened, head grew heavy, thumping on my shoulder with each step. You would rest for a moment, jolt awake—like me, always fighting sleep—rest some more. You became small, your legs drawn up, shoulders hunched, hands tucked between your belly and my back. I swear you grew lighter, once consciousness had left you.

And I felt lighter too. Walking the long border, night and day, earth and water, the vast inverted curve of beach, the cape where the cliffs stepped forth to take their punishment, the next cove, the next cape, as many as I wanted. At each cape, I’d pause. The boulders that had fallen from the cliffs lay piled on the shelves of rock or rooted in the shallows, and the water beat them, and the water broke, not them.

For once I had no purpose, no one thing to head for and surmount. I was alone and with you, your small breath, my one set of prints for two. Before us and behind us, embracing us, the mist that seemed to breathe light, that was the light, was rising from its sleep to take the sky. I thanked you for waking me. I did not want to turn back.

I Will Carry You

daughter, up, into the light.

You will find me weaving

large enough to hold your sorrows

strong enough for me to carry

to the river, tip into rushing

water, where burdens are cleansed

against stones, dispersed by rain

and driven far out into the sea.

Destination, Seaside (Aubade to a Mountain)

you are, sunk deep into your mountain-ness.

brightening morning warns, Time to go. So I too rise,

sons gone to war. But you will not miss me.

I am flesh. You are millennia. Now becoming

memory, you are dark as a Yin shadow.

Day is warming to a slow burn.

Mary C. Rowin’s poems have appeared recently in Solitary Plover, Portage Magazine, Panoply, Bramble, the literary magazine of the Wisconsin Fellowship of Poets, and in you are here, The Journal of Creative Geography.  Mary lives with her husband and seventeen year-old cat Rio in Middleton, Wisconsin.  She is a docent at the Chazen Museum of Art and tutors English as a Second Language.

You learn the rhythm by the third day.  Eray raises and lowers the anchor. Mehmet

drives the boat and—. “You write” —keşke—.  Remember : the sound of water. Taxis

boat to boat.  In the evening, he— air haunted by the taste of salt—Skin.

The sun sets portside.  Grilled shrimp and rakı. How could we help having more than

enough —keşke—: Andriake harbor in the morning.  You watch sea

turtles.  Fish. Things spoken as—unspoken give us a way. You broke your

vow of sobriety to dance barefoot.  Green, how much he wanted —your

dreams—green the trails of memory. Do you like American music? Your best

friend texts: “You basically are embodying every music video ever.”  Why then—

On the 4th day, Roman ruins slide starboard—you wonder if you could—

come for days—The passengers mistake you for crew. Neşko named for his dead

grandfather.  His father— dead when he was three years old.  No, he dosen’t—tell

you all about it : the old house, working the boat at 13, the uncle the drunk stepfather

last night you slept on the boat.  He wakes you early. The Turkish Word­

of the Day is nefis. Part of speech : adjective : Nefisti — That was delicious—

You tell yourself that someday—

Jennifer Reimer‘s first book of prose poetry, The Rainy Season Diaries, was published by Quale Press in 2013.  Her poetry and fiction have appeared in: The Denver Quarterly, Tinfish, Puerto del Sol, Weave, Zoland, Gyroscope, and Glass. She has an MFA in Writing from the University of San Francisco and a PhD in Ethnic Studies from UC Berkeley.  She is the co-founder and co-editor of Achiote Press.  She currently lives and work in Ankara, Turkey, and enjoys escaping to the Mediterranean coast where the raki, like the poetry, is abundant.  She believes sea salt should be its own food group.

The Little Mermaid Goes To Work

Red wig heavy around her face, she signs

the books and videos the chubby hands

hold out to her across the gold chain fence.

Her shift will end at six. And then the next

girl will put up with it. She’ll smile so wide,

her lipstick will crack, flake off and fall like

so many drops of Sleeping Beauty’s blood,

come back to stain the spindle red again,

so she can rest, away from teeming hordes

of five-year-olds who want to know if she

has legs. She’ll dream, anyway, of such peace,

red lines right through the oceans of her eyes.

Marta Ferguson is the co-editor of Drawn to Marvel: Poems from the Comic Books (Minor Arcana Press, 2014), the editor of the Columbia Art League’s Interpretations anthology series, and the author of Mustang Sally Pays Her Debt to Wilson Pickett (Main Street Rag, 2005). Her poetry has appeared in dozens of literary magazines, including The Cortland Review, Poet Lore, Spillway, Rattle, and Prairie Schooner. A former poetry editor for The Missouri Review, Marta has been the sole proprietor of Wordhound Writing& Editing Services, LLC for 15 years. Her officemate is a chinchilla named Grayson (Yes, after Dick Grayson, Batman’s original Robin). In her spare time, Marta enjoys wickedly complicated board games like Five Tribes, Pandemic, and Carcassonne.